Wow…what a day! what a weekend!

Posted on April 8, 2014 by fatfeministactivistart

I’m not sure I can do the past few days justice in a blog post, I’m exhausted, but if I don’t try? God only knows how long it will be before I do…Or like so many other post opportunities will it be lost forever in Procrastination Land.

I leave for China in two days and I have just completed a whirlwind two days in New Brunswick, NJ; at what I consider the pinnacle of my art career.

In April of 2013, I heard that Ferris Olin and Judith Brodsky of the Feminist Art Project were organizing a series of panels entitled The Fearsome BMI: Women Artists and the Body.  Having worked with them for a while, one would assume that they knew what I was up to in my studio practice…But surely they did not if I had not been included in these talks!  I mean that sure sounded like the panel I was meant to be part of!

Sad but true they had not one idea what my art was like, and I like to think it was because I did such a good job of keeping my art off the table when I am acting as regional coordinator for the Feminist Art Project or as the President of the Women’s Caucus for Art.  But … I was not going to hide my light under a bushel on this topic for very much longer.  It was time to speak up for myself and my art.  So I wrote a letter, sent links to my work..and held my breath.

I found out when and where the first panel was taking place and flew to New York for a day to attend, and defend my turf.  I also rallied Substantia Jones and some of her larger then life Adiposers, to come down and throw their weight around.  “Nothing About Us, Without Us” was our cry.

During the Q and A… tripping over my tongue, trying not to sound racist or rude or disrespectful…fearing for my politically correct life…I attempted to tell the women on the panel and Ferris and Judith…YOUR DOING IT WRONG!!! YOU FORGOT US!!!  It was traumatic to say the least.  I wrote another letter, asking if they wanted my opinion on the panel….cause I was ready to critique!!!  Don’t mess with me…( thank god that email was ignored )

Months later I got an email inviting me to be the show…The Fearsome BMI…At Rutgers, part of the Mary H Dana Women’s Series no less.  I was floored, excited and stunned into silence, so much so that Judith had to prod me into responding.  ( I didn’t want to appear too eager now did I??? )

Well the show went up end of March…I had museum quality crates made to ship the work, Rutgers paid for the shipping ( first time ever in my career ) and this week was the reception for the exhibition and a day long women’s health symposium, which focused on the idea of BMI: Science or Myth.

It was the most interesting and diverse group of woman, Activists, Doctors, Sociologists, Authors, Gender Studies, Public Heath Professionals, and Artists.  With the exception of Jane Brody, as key note speaker, whose presentation was deeply problematic, rude and bigoted…It was a very exciting event filled with new ideas, research and intelligent dialogue, on a very complex issue that plaques women’s health and treatment there of.

I think it is going to take me a while to digest all the things I heard here, to find a way to keep these fabulous connections I’ve made open and growing.

I  feel so honored to have been included in such a ground breaking event.  I’m glad I spoke up for myself and I was thrilled that I was heard.  I can only hope I did justice to the cause…and that I have inspired more people to stop dieting. 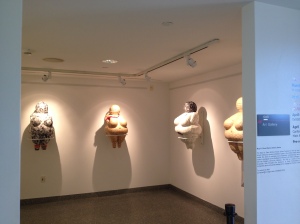 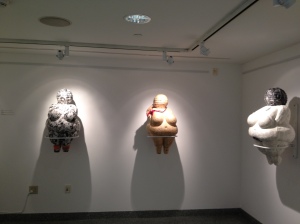 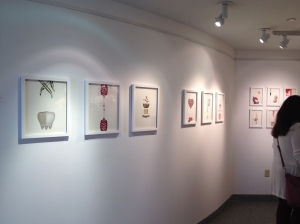 I'm a fat feminist activist artist...if you have any buttons I want to push them. I am currently working on an installation about the so called "Obesity Crisis." Right about now I would like to shove a big old apple in Michelle Obama's mouth so that she would keep it closed. No offense but she's not making anything better by getting parents and children all obsessed with FAT...Listen to your own bodies folks the answer is there. Oh yes...and send me your diet books...I need them all.
View all posts by fatfeministactivistart →
This entry was posted in Uncategorized. Bookmark the permalink.